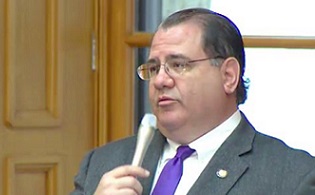 A bill to protect gun stores and firearm owners during a state of emergency, something that the legislation’s sponsor said hasn’t been threatened, passed the Ohio House on Thursday, drawing the ire of gun safety advocates and the state’s largest police union.

Senate Bill 185 would prohibit any government authority from stopping gun sales or taking firearms during a crisis. It was introduced by Rep. Tim Schaffer (R-Lancaster) and is meant to address the Second Amendment not having a pandemic or natural disaster clause.

Dozens spoke out against it, including gun safety advocates, religious leaders and police. Only four people testified in favor, including Buckeye Firearm Association’s Rob Sexton and three other gun lobbyists.

“As we just saw over the last couple of years, government has sweeping powers when they declare an emergency,” Sexton said.

Erick Bellomy, a survivor of gun violence and an advocate for more restrictions, doesn’t understand why this bill is necessary.

“They’re trying to fix something that they don’t need to fix,” Bellomy said. “They’re putting in overtime for no reason when they could actually be doing something meaningful for the state.”

Shaffer addressed this point, explaining that Michigan Gov. Gretchen Whitmer did not label gun businesses as essential during the height of the COVID-19 pandemic.

“Fortunately, Ohio had a governor and legislature that did not use their power to infringe on Second Amendment rights,” the lawmaker said. “It is critical to proactively define the limits of the government’s power to prevent future abuses.”

Ohio has never closed gun businesses, not even during the pandemic.

“I just don’t see that sense of it,” Bellomy said. “I think they’re just trying to keep the money in their pockets from the gun lobby.”

“It will create a lot of questions on what you can and can’t do and that can make situations more dangerous,” he said.

Fraternal Order of Police (FOP) President Gary Wolske said he and many of his fellow officers don’t understand why lawmakers who claim to support the blue are taking away their power.

“A lot of things that the legislators have done have curtailed police officers,” Wolske said.

This comes after the FOP has asked for about a year now to stop passing bills that loosen gun restrictions, like permitless carry and allowing approved adults to bring a firearm into a school.

When relaying the concerns from police to Sexton, News 5 asked if the bill could make Ohio less safe.

“I actually think they make things safer for the average Ohioan,” Sexton said. “If there is unrest, civil unrest or a riot in the neighborhood you live in and your neighborhood gun store cannot sell you a firearm to protect you and yourself and your family, then that puts you at more risk.”

The bill passed the House with a few amendments, and it is getting sent back to the Senate for final review. Gov. Mike DeWine’s office says he will evaluate it when it gets to his desk.