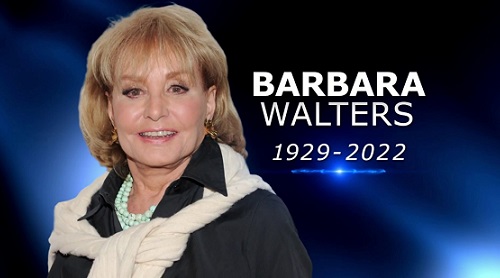 Barbara Walters, a pioneering journalist who blazed a trail for women in the news and co-created The View for ABC, has died. She was 93.

Her death was confirmed by ABC News, her journalistic home for nearly 50 years. At ABC, she became the first woman to anchor an evening news program. In 1979, she became a co-host of 20/20 before helping launch The View in 1997. She retired from the show in 2014, although infrequently appearing for interviews and specials for the network.

“I do not want to appear on another program or climb another mountain,” she said. “I want instead to sit on a sunny field and admire the very gifted women — and OK, some men too — who will be taking my place.”

For decades, viewers grew with Walters as she interviewed some of the more controversial figures in the world, from Cuban leader Fidel Castro to Vladimir Putin. An estimated 74 million people watched her interview with Monica Lewinsky at the height of then-President Bill Clinton’s sex scandal involving an affair with Lewinsky. In her outstanding career, Walters would win 12 Emmy Awards, her first coming in 1974 for her work on NBC’s Today show.

“Had there not been Barbara Walters, surely all of the other women who have followed in her footsteps, including myself, could not stand where we stand and do what we do in this industry today,” Oprah Winfrey said of Walters when she was awarded a Lifetime Achievement Award from the National Academy of Television Arts and Sciences.