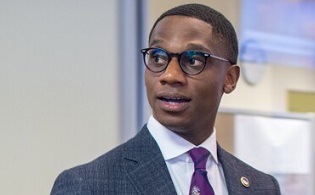 Cleveland Mayor Justin Bibb will become vice-chair of Climate Mayors, a bipartisan climate organization the includes mayors across the country.

Bibb announced his new role during a news conference last month and said he intends to help represent mayors as they confront the intersections between climate change and other issues like lead paint, air quality and crime.

“We as mayors and as city hall leaders, we must do a better job of translating what we’re doing and how these issues affect the everyday lived experiences of our residents,” he said. “I’m looking forward to using my role as vice-chair to be that bridge, to be to be that continuous organizer and that translator so that the country knows that U.S. mayors, we’re on the front lines and make sure that the promise of climate justice is real moving forward ahead.”

Bibb said he is looking into ways to use American Rescue Plan Act funds to promote climate-friendly jobs and build the green economy in Cleveland.

The city is currently developing plans for its North Coast Connector project to connect Downtown to the lakefront, and recently began implementing electric vehicle charging stations in underrepresented communities.

Founded in 2014, Climate Mayors has more than 500 members in 48 states. Houston Mayor and Outgoing Chair Sylvester Turner said he is confident the new leadership will continue to uphold the organization’s mission.

“There’s a lot of work still to do ahead of us for all of us to collectively meet the goals of the Paris Agreement,” he said. “But one thing I am certain, I am confident as I step down as Chair, that our organization will continue to amplify the voices of mayors and have shaped support and implement the federal and state policies and programs that will enable us to accelerate the energy transition and reach our goal of carbon neutrality in an equitable manner.”

Mayor Satya Rhodes-Conway of Madison, Wisconsin will be taking over as chair, making her the first woman to hold that position. As chair, Rhodes-Conway said she intends to promote effective engagement with the federal government and to strengthen collaboration between the organization’s members.