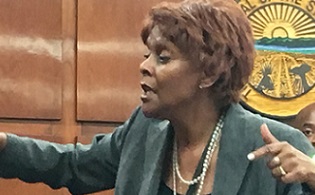 East Cleveland City Council is currently split over filling the vacant ward three seat. Two people have both been sworn into the seat with one councilmember now claiming the rest of council did not follow the charter when appointing a nominee earlier this week.

The city’s Law Director Willa Hemmons announced last month that Councilmember Nathaniel Martin selected and swore in Mark McClain to serve as the ward three councilmember. However, the remaining three councilmembers had already sworn in Lateek Shabazz to the seat twice this month.

Martin claims the councilmembers did not follow correct procedure when selecting and swearing in Shabazz. Martin was not present at the meeting where council initially selected Shabazz, and afterward, he threatened legal action if the meeting wasn’t redone, Councilmember Pat Blochowiak said. Martin alleges he was not served papers notifying him of the meeting at his home, therefore the process was not legal. However, documentation from Bonnie Speed Logistics, a delivery company used by council, confirms delivery of notification to Martin. Martin claims the notification was left in his side door, which he doesn’t use, so it isn’t legal.

Email service is also considered a legally valid form of notification, and Martin was emailed notice of the meeting, Blochowiak said.

“It was also emailed. It also went on his Facebook page, and it was also left in his mailbox at City Hall. And it was posted at City Hall,” Blochowiak said.

East Cleveland’s charter states that written notice must be served personally or left at councilmember’s usual place of residence.

“He doesn’t have a leg to stand on,” Blochowiak said.

If council didn’t fill the ward three seat within 30 days, it is up to the council president to fill the seat.

A reorganization of council also occurred at the two meetings where Shabazz was tapped to serve on council. Martin did not attend either meeting. Council voted to appoint Councilmember Korean Stevenson to serve as council president. Martin was president at the time. He claims he is still acting president, because the procedure to elect Stevenson was not correct in terms of notifying him of the meeting.

“I don’t care if she becomes president,” Martin said. He continued that proper procedure has to be followed when electing a new council president. “They didn’t do it right,” he said.

The last day for council to confirm a new councilmember was Dec. 29. Martin said it was up to him to then fill the seat, since council did not do so legally.

“I followed the charter, Martin said. “I’m wise enough not to make these kinds of mistakes.”

Martin claims the rest of council who affirmed Shabazz, Councilmembers Blochowiak, Stevenson and Juanita Gowdy, have their own agenda they are trying to fill by not following the charter.

He’s worried about the future of East Cleveland with them on council.

“They are hurting the city moving forward,” Martin said. “They are an impediment and a barrier.”

According to Martin, McClain is now the acting ward three councilmember. He has a legal background, previously working as an attorney and a clerk of council, which makes him a good fit for the position, Martin said.

Blochowiak expects the Cuyahoga County Board of Elections to decide the matter at its next meeting.

Shabazz is an East Cleveland native active in local politics. He previously worked as a real estate investor and operated a retail business in Chicago before moving back to East Cleveland. Recently, he was active in the failed effort to recall Mayor Brandon King.

This battle over who fills the ward three seat is likely to head to court, Martin said. This isn’t the first time filling a vacant council seat in East Cleveland went to court. Former Councilmember Ernest Smith, whose recall in November left the ward three seat open, was found to have been illegally appointed to council by the mayor in 2017. However, by the time the courts ruled, Smith had already won reelection. He was recalled over allegations of misusing city property and improperly reporting income.

Earlier this month, Blochowiak and Stevenson filed suit against Martin and Clerk of Court Tracy Udrija-Peters alleging they were acting without the consent of council in regard to filling the ward three seat. The court found the suit moot, Blochowiak said. Stevenson in her role as council president has since fired Udrija-Peters.