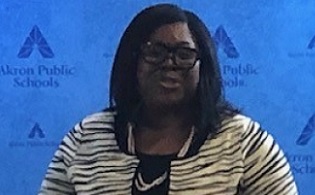 The Akron Public School District has decided to offer the job of new superintendent of schools to Christine Fowler-Mack.  If she accepts, Fowler-Mack will take over for retiring Superintendent David James at the end of June. She would be the first woman to lead the school district since its creation in 1847.

After much discussion, the decision by the Akron School Board came on Thursday night, following 30-minute virtual interviews with Fowler-Mack and the other finalist in the process, Sandy Womack Jr.

Both finalists are graduates of the Akron Public School District, with Fowler-Mack graduating from East High School and Womack an alum of Buchtel High.

Fowler-Mack is currently the chief of portfolio planning, growth and management for the Cleveland Metropolitan School District. She began her career teaching for Akron Public Schools. Fowler-Mack then went on to Kent, Cleveland Heights and CMSD. She has overseen CMSD’s work to transform its high schools under the Cleveland Plan.

James’ retirement at the end of June comes after 13 years as the head of the school district.

One of James’ biggest accomplishments as superintendent was the creation of the College and Career Academies of Akron, which brings students together with local businesses and nonprofits, and the construction of 36 new school buildings.