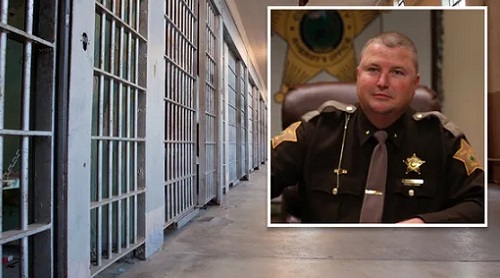 Women at an Indiana jail were raped and assaulted by male inmates, who were given access to their pods in exchange for $1,000, according to lawsuit.

In what can only be described as a waking nightmare, women detained at an Indiana jail allege that they were raped and assaulted by male inmates, who gained access to their pods in exchange for an $1,000 bribe.

Eight women came forward on Monday as a part of a second lawsuit filed against Clark County Sheriff Jamey Noel, ex-corrections officer David Lowe, who the suit alleges gave the male inmates the keys, and unnamed officers on duty the night of October 23rd.

According to the lawsuit, for over two hours, the women were raped, assaulted, harassed, and intimated by the male inmates, who repeatedly told the women they’d kill them if they called for help.

JANE DOE 1, an anonymous plaintiff in the second lawsuit, alleges that she sustained significant emotional and physical injuries from the night including – “nightmares, bleeding, vaginal tearing, and genital herpes.”

What happened to these women “is worse than you can ever imagine,” says Bart M. Betteau, one of the attorneys representing the women in the initial case against the Clark County Sheriff’s department.

“The one thing that the women thought they could rely upon in this situation was security,” says Betteau. “Women are hitting the call button… they keep hitting it repeatedly, but nobody comes.”

It wasn’t until after the men left, that the guards finally arrived, according to the lawsuit. Only it wasn’t to protect the women, the suit alleges; it was to punish them.

According to the lawsuit, the women were told they had lost their “dark” privileges, and the guards kept the lights on in the women’s pods for the next 72 hours. During that time period, the women were interrogated by officers, and had all of their personal items, including pillows, blankets, and colored pencils, removed.

The Clark County Sheriff Department says the blame falls squarely on “one rogue corrections officer,” David Lowe, who was fired from the department within days of the attack and has since been charged with felony official misconduct.

Larry Wilder, an attorney writing on behalf of the Sheriff’s Department, wrote that Lowe alone, “chose to abandon his training and morals, and made the unilateral decision to mortgage his career and future by allowing inmates access to jail keys.”

The department also pushed back on claims made by the alleged victims that implicated the department.

In a statement to The Root, they claim that subsequent interviews with the detained women “indicated that there was a systemic plan by individuals who were incarcerated that evening to develop the narrative that makes up the crux of the claims in the civil case.”

It’s worth noting, that the statement doesn’t clarify what the department alleges the women were lying about, or what was discovered on their video surveillance.

In an interview with the Washington Post, Lowe denies giving the keys to the male inmates in exchange for money. He says it was an accident caused by being overworked and that he was “coerced and assaulted” into giving his confession.

Betteau doesn’t buy the Sheriff Department’s line that no one else knew what was happening at the Clark County jail.

For one, he says that the pods certainly would have been monitored on video surveillance. And two, someone should have been in charge of checking on the women throughout the night, which he says, no one ever did.

“This is not a huge jail. And you have a number of people at any one time manning the jail,” says Betteau. “Everybody in there had to know.”

What happened in Clark County is not an isolated incident, says Antonio Ingram, Assistant Counsel at the NAACP Legal Defense fund.

“It’s pretty prevalent in the carceral system,” says Ingram. “Many individuals lack the protection we’d want them to have and are at risk of increased exposure to sexual violence and sexual assault on top of that.”

In 2018, over 27,000 allegations of sexual violence were reported in correctional facilities, according to the Bureau of Justice Statistics. Roughly 58% of these assaults were committed by other inmates, and 42% of victims were assaulted by staff.

Ingram says the situation is particularly dire for incarcerated Black women, who are imprisoned at 1.7 times the rate of white women, according to the Sentencing Project, and face higher levels of sexual violence overall.

“Given that our country still incarcerates Black women at a higher rate,” says Ingram, “any violence that occurs to incarcerated individuals who identify as women demonstrates the heightened vulnerability for Black women.”

In Clark County, Indiana, Betteau says there’s still a lot to unravel about what happened that night. But in the meantime, he worries for anyone still housed in the county jail.

“You have to think about what sort of mentality would allow that to keep going on, and not one person did anything,” says Betteau. “I don’t know if it was a common practice or not. But I’ve got real concerns about any inmate in that jail with that type of mentality going on.”