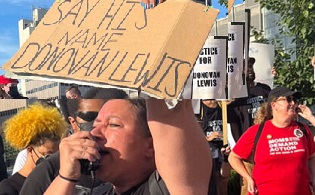 A year after the death of Breonna Taylor, Louisville banned no-knock warrants entirely, and the state of Kentucky placed restrictions on how they could be executed. Now, the Columbus Division of Police is looking at their own set of changes – particularly on how late-night warrants are done after the tragic death of 20-year-old Donovan Lewis in the Ohio city a couple of weeks ago.

NBC News reports Chief Elaine Bryant issued a directive that “high-level approval” will be needed for Columbus police to serve warrants between 11 p.m. and 6 a.m.

“Effective immediately and until revised or rescinded by me, no pre-planned arrest warrants shall be served at private residences for all misdemeanor offenses (including domestic violence) and non-violent felony offenses between the hours of 11:00 p.m. and 6:00 a.m. without the prior approval of a lieutenant or above,” the memo said. The memo also stated that the new policy does not apply to tactical units like SWAT or task force personnel.

Donovan Lewis was fatally shot in his apartment at 2:30 a.m. by Columbus police Officer Rick Anderson while officers attempted to serve an arrest warrant for improperly handling a firearm, assault, and domestic violence.

While these changes are a good first step, Lewis’s family and the surrounding community still want accountability. In particular, Lewis family attorney Rex Elliott wants late-night warrants gone completely and wonders why this happened in the first place.

Calls for justice continued at Lewis’s funeral on Saturday, where Rev. Jeremiah Posey Sr. said to a heavy-hearted crowd, “He wasn’t armed. He wasn’t dangerous. He wasn’t America’s most wanted. He was just Donovan.”